What kind of materials were used for handwritten Bible manuscripts? 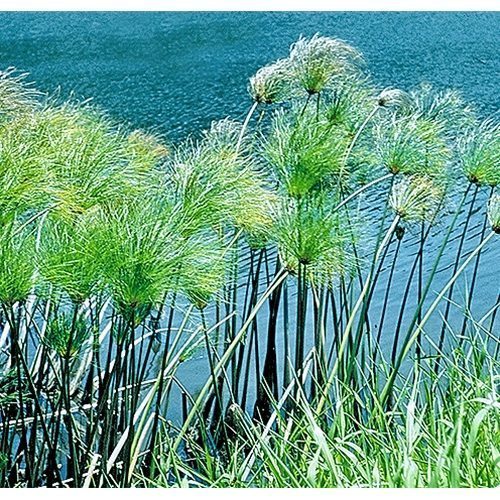 When reading about the history of the Bible, one frequently encounters terms such as papyrus, parchment, vellum, and sometimes that strange word palimpsest. What sort of materials are these, and how were they made? Those are the questions this short series of articles aims to answer. Let us begin with papyrus.

We might call papyrus a precursor to the paper we use today. The name is derived from the plant Cyperus papyrus, which was grown in Egypt as well as other parts of the Mediterranean. The stem of the plant is triangular and about 6 cm wide, and the pith of the stem was used to make sheets of papyrus.

Having removed the outer layer of the stem, the pith was cleaved into thin slices, about 40 cm in length, a bit like peeling a rhubarb. The slices were lain horizontally, side by side on a hard surface, slightly overlapping. Then a new layer was laid on top, this time vertically. No adhesive was needed, as the pith is quite sticky and fibrous on its own. This was laid to dry in the sun under pressure, or with gentle beating. To achieve a smooth surface suitable for writing, the sheets were polished with a round object, then cut into rectangles or squares, about 15-30 cm in size.

Papyrus was usually sold in scrolls, about 4-6 metres in length. To make a papyrus scroll, several sheets were glued together consecutively. The side of the sheet where the fibres were horizontal was considered the best side to write on, and is to this day called the recto (the correct side), while the back is called the verso. The verso is only rarely used for writing.

The origin of the word ‘bible’ is actually related to papyrus. The town Byblos[1], on the Mediterranean coast, was a major shipping port for papyrus. Over time, the name of the town gave rise to the Greek term biblia, which refers to written manuscripts, scrolls and small books and hence bible, which in reality refers to any collection of small books.

In the Bible, we learn in 2 John 12 that John the Apostle used papyrus for writing: «Though I have much to write to you, I would rather not use paper and ink…»(ESV 2001)

In the Nordic Bible Museum’s shop, you can purchase papyrus sheets to write on.

The next part in this series of articles will detail the materials of parchment and vellum.

[1] Byblos is assumed to be one and the same as the modern city of Jbeil, situated in present-day Lebanon, about 30 km north-northeast of Beirut.